Embryo Jewellery: Killing for a Keepsake 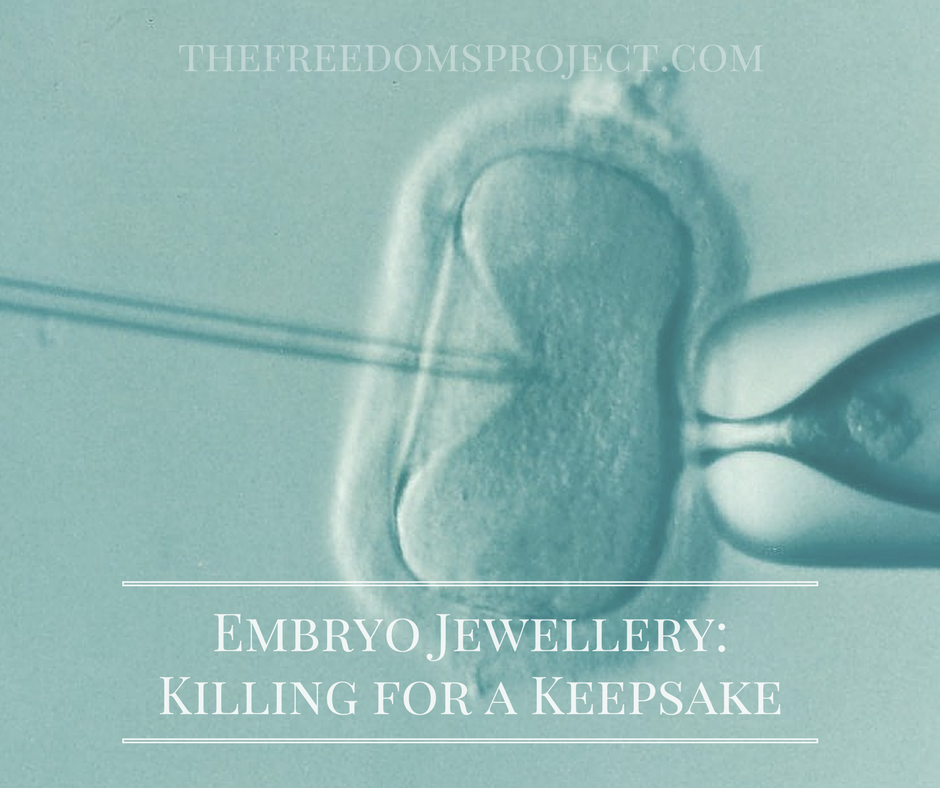 Consider this comment from a mother who used IVF to create her children:

She was asked in the beginning about the matter of surplus embryos, but how could she think about those she might not want when her thoughts were consumed by the children she longed for?

How do I Dispose of Thee? Let me Count the Ways

Parents currently have several options for their frozen embryos - those tiny lives they don't want to have implanted at the present time. Some parents choose to donate excess embryos to infertile couples - ethically perilous, but it at least gives their babies a chance at life. Others send them to certain death at a research facility, with the deceptively altruistic mentality,

"We were ultimately still giving life, just not for those particular five embryos,"

Still others condemn their children to a 'compassionate' thawing ritual - a ceremony more akin to child-sacrifice than to parenting. Most leave their little ones on ice until they can force themselves to make a decision, which is often tied to the financial burden of paying for a specialist storage facility. But there is another option being pioneered in Australia, which is surely the most abhorrent of all. Not content with completely divorcing parenthood from sexual intimacy via the IVF process, parents (and I use that term loosely) who need some kind of 'closure' to mark the end of their frankenstein bio-nightmare are having their frozen embryos cremated and preserved as jewellery. Those tiny entities - rejected by their parents as living children, have in death, become a source of consolation to their needy mothers and fathers. Now consider this: at some point in their extremely short lives, those poor little embryos, conceived in a test-tube and nurtured in a freezer, are thawed out, - killing them in the process - then cremated. The resulting ash is set in resin. The parents - who don't want to pay to keep their little ones alive and won't even allow them a chance at life by donating them, are content to let their babies die and become a tangible reminder of their utter selfishness. Their babies become tiny trophies for men and women who will literally do anything to become parents. Then, having fulfilled their dreams, their children become expendable.

I guess you can tell that I'm not a fan of IVF.

There are many people who think it's ok to collect dad's sperm after he masturbates then take it to the lab to be mixed with an egg extracted from mum - or worse, from a complete stranger. Some people think it's fine for fertile parents to use IVF to create a child of the desired gender, and even to abort healthy IVF-conceived babies if the gender turns out to be 'wrong'. There are some people who have no problem with single women or lesbians buying some sperm and using it to impregnate themselves. And there are some who don't think that surrogacy is a very sick scenario - that it's ok for *someone's* sperm to be united with *someone's* egg and placed in *someone else's* body to incubate, as long as *someone* ends up with their heart's desire: a child. I'm not one of those people. And I'm sure most of you reading this right now aren't one of those people, either. It's true, there can be vaguely life-affirming outcomes to some of these bizarre stories - for example, this couple adopted seven embryos and had two implanted in the womb of a friendly surrogate. The pregnancy ended prematurely, but the little ones survived and are today relatively healthy toddlers. (IVF-conceived babies have higher risks of many serious health problems - read more here.) The babies they adopted were from America's 650,000 leftover embryos! Redundant. Surplus. Commodified children. Completely powerless children who are worth their weight in gold. But we don't hear what happened to the remaining 5 adopted embryos! Are they now waiting in the too-hard-basket of an Australian freezer?

Who Even Thinks of Doing This??

I've seen some pretty weird stuff from abortion advocates: abortion cocktails (see above), fetus biscuits and pro-abortion tshirts are not uncommon. (I've saved some of these on this pinterest board.) In fact, my idea of grotesque has had to be re-callibrated several times throughout my pro-life journey. But making jewellery from embryos takes it a step further. Who could even think of such a thing? Well, it was a midwife. A woman who was trained to bring babies into the world in the most natural way possible, has tapped into the designer baby market to make some money while validating self-centred parents. While the biz's Facebook page claims that clients are 'informed' and 'educated', we know that this isn't always the case when it comes to the emotional issues of infertility and conception. But for a medically-trained midwife, there is no such ignorance clause. I can get past the breastmilk and cordstump jewellery - it's the right of a parent to want to keep these, I guess - but a midwife knows that to thaw out and cremate an embryo is to take a human life. Making this jewellery is death-dealing, no matter how heartfelt is the idea of wanting a keepsake.

"The families we craft for are truly aware of the various world wide options for Embryos in storage. They are informed, educated & loving people who have made an educated decision."

Until a friend showed me the article about embryo jewellery, I had thought that 'frosties' were a kind of sugary cereal. But then I started doing some research into the subject and entered the online world of IVF mothers. Conversations are littered with acronyms such as BFP's, FET's and ICSI's as well as the frankly disrespectful references to 'frosties.' One mother spoke about having her frozen embryos implanted to get them 'out of the way' before starting the next round of treatment:

"...but we had 4 frosties in the freezer which were day 5 and day 6 blasties which we were told were all very good quality,however we were also given the odds that only 50% survive the thaw so i really didnt have any faith in the FET and actually went into it just wanting to get them out of the way as our clinics policy is to use all frosties before starting a new fresh cycle."

Below is a picture of a thawed blastocyst. At this stage of life, cells have differentiated into two types: one type of cell becomes fetal tissue, that is, the baby itself, and the other type develops into the baby's placenta. It takes about half an hour for a frozen embryo or blastocyst to thaw. We're not told at what stage of the jewellery-making process thawing occurs, and we're not told if anyone even cares. Perhaps it happens before packaging or perhaps during transit: either way, the baby's death passes unmarked by its parents. (Photo credit Assisted Conception Australia.

Where do we draw the line?

It simply isn't rational for people who resort to technology in their desperation to become parents, to cavalierly dispose of human life - their own children! -  once their desperation disappears. I mean, we suction healthy babies from unwilling mothers and then use risky, expensive technology to impregnate willing ones! Is it not enough to practise eugenics by aborting sick babies and weak embryos, without also thawing and preserving the healthy ones? Is it ok to call jewellery made from dead babies, 'sacred' but to deny the sacredness of their very lives? It's so ironic that the little entities, commonly known as blobs of cells by those who would mercilessly suck them from their mothers' wombs - are referred to as 'babies' by mothers who have the power to let them live or die with a thumbs-up or down to an embryo storage facility. Roman emperors had nothing compared to the power of 21st century mothers. Another quote from the maker of this diabolical jewellery:

“What a better way to celebrate your most treasured gift, your child, than through jewellery? It’s about the everlasting tangible keepsake of a loved one that you can have forever.”

Well, you could let him live, I suppose. You could allow him the basic dignity of spending time in the womb of his mother, to live or not, to grow or not, but at least to have a chance. You could celebrate the life of your child by giving him some small gift of warmth and softness, however brief, rather than letting him travel in an insulated pouch from lab to lab, frozen and sterile from beginning to end. You could conceive a child so as to give him life, and you could rise like a human should above the blind proliferation of biology.

I agree that children are our most treasured gifts - that's why it isn't humane to create them in a lab or flush excess babies down a sink. And it is definitely not humane for mothers to have their babies thawed out, cremated then strung around their necks. Children are made in the image of God! They are created with an eternal soul. THAT is their 'everlasting, tangible keepsake' - their soul. It is not the right of an adult to manipulate conception or death, for any reason, but least of all, to create a trophy for their own selfishness.   More references: What Happens to Extra Embryos After IVF?, How many of your frozen embryos survived the thaw?, Assisted Conception Australia