Our Children in the Crosshairs - Once Again 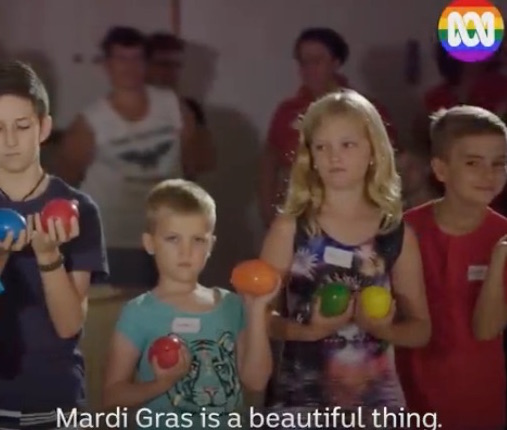 And all three of these truths come together perfectly in the latest outrage being perpetrated by “our” ABC. The activists at the ABC are now putting out videos featuring young children singing the praises of the homosexual agenda. And you and I are subsidising all this with our hard-earned tax dollars. Yes, you heard that right. In conjunction with this year’s Gay and Lesbian Mardi Gras to be held tomorrow in Sydney, the ABC’s indoctrination unit has released a video featuring all sorts of young children extolling and celebrating the Mardi Gras. “Mardi Gras is a beautiful thing” is what we first hear in the two-minute video. It concludes with young children excitedly jumping up and down shouting, “Happy 40th Mardi Gras!” And how many of our tax dollars went into making that slick propaganda piece I wonder. You can view this appalling video here: www.facebook.com/abcme/videos/10155212100802478/

To see how utterly up to their ears the ABC is in the homosexual agenda, simply check out this site of theirs which features one pro-homosexual program after another – dozens of them in fact: iview.abc.net.au/collection/happy-mardi-gras They are out, loud and proud about how much pro-homosexual content they are awash with, and are streaming in Australian homes, all at our expense. On and on it goes, with magazines, films, books, and so on. They even made a documentary celebrating the 40-year history: www.abc.net.au/radionational/programs/drive/riot/9479596 And if that does not convince you, simply go to the main ABC website, and use their search engine, typing in “Mardi Gras”. I just did and this is what I got in response: “Page 1 of 6,495 search results SHOWING RESULTS FOR mardi gras”.

There is little question that our taxpayer-funded ABC is one of the largest and most unapologetic promoters of the homosexual agenda in the country. Simply imagine the outrage if the ABC did something similar to say, Christianity. What if we found thousands of hits on it, all in a positive light? What if the ABC put out a video beginning with the words, “Christianity is a beautiful thing” and concluding with “Happy 2000th Christianity!”. What if it targeted children, showing them jumping up and down praising Jesus? What if they made documentaries and sold books in their shops celebrating and promoting Christianity? Or if you prefer, simply substitute ‘heterosexual marriage’ for ‘Christianity’. How many books, docos, films, videos and programs – including children’s programs – does the ABC have celebrating, extolling and promoting the marriage between one man and one woman? Oh yeah, that is not part of their agenda. So we will never see the sort of overkill we find with all things homosexual and transgender in general and the Mardi Gras in particular with these non-PC values.

Never mind that the majority of Australians still identify as Christian, and still overwhelmingly enter into heterosexual marriages. But the radical left narrative of the ABC will just keep ignoring the great bulk of Australians and their values, and will continue to push radical activist agendas. And they will do it with our money. And they will laugh at us as they do so, knowing they can get away with murder, and there is basically nothing we can do about it. Well, I am here to make a suggestion aimed at doing something about it: It is high time to take away all federal – that is taxpayer – funding of the ABC. It does not need our lavish subsidies to keep pushing its radical agenda, especially when they keep targeting our young, vulnerable children. Enough is enough ABC.

(Hat tip to Caldron Pool for first alerting me to this story: caldronpool.com/abc-promoting-gay-lesbian-mardi-gras-children/ )

Further reading on this website: Are Pedophiles Writing Your Child's Curriculum?

And you can sign this petition to the manager and producer of ABC Kids to stop this kind of damaging advertising.