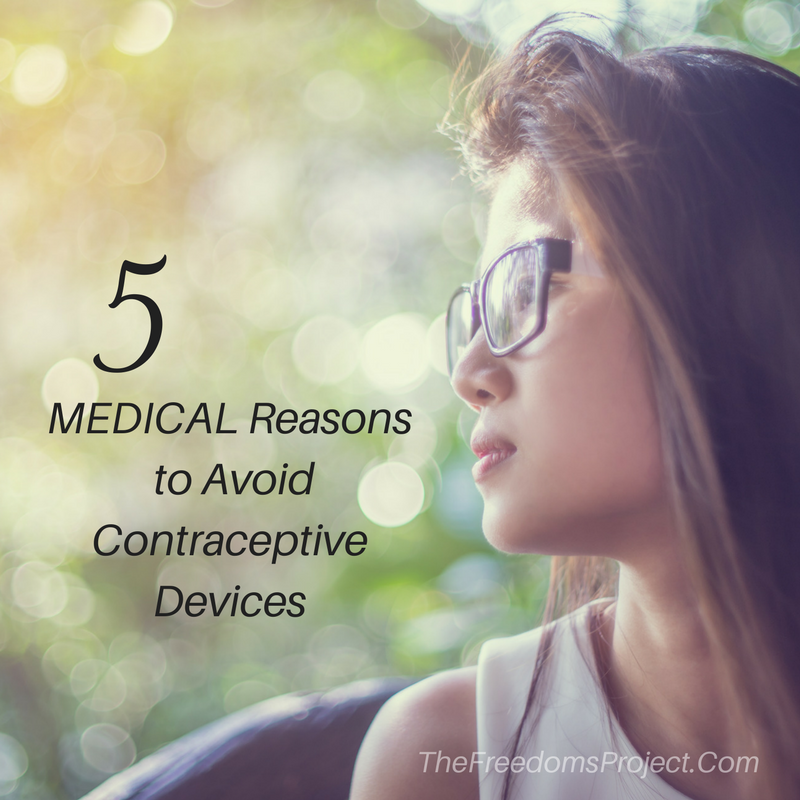 LARCS are more expensive than other forms of artificial contraception, making them less popular with women on lower incomes. They are marketed as 'set and forget' products and said to be 99% effective. There are two main kinds: IUDs and hormonal implants. Intrauterine Devices, or IUDs, come in two forms. One releases a hormone known as levonorgestrel, and the other releases small amounts of copper. Both of these substances create an environment in the uterus which is hostile to a newly-conceived embryo, causing an abortion. This alone is a persuasive reason to avoid the use of the IUD. In fact, IUDs are often used as a form of emergency contraception. The other kind of LARC is an hormonal implant. The most common form of implant is a small rod which releases the synthetic hormone progestogen, and is known by the brand name Implanon. Implanon is inserted under the skin of a woman’s upper arm, and prevents ovulation. A secondary effect is to prevent implantation, thus it also causes abortions. Hundreds of women have experienced problems with Implanon, such as finding that their devices was unable to be removed or that it had failed to be inserted properly. Another system, known as Essure, and meant to cause permanent infertility, is explained indepth below.

1. Uterine Perforation: One kind of IUD is marketed as Mirena. The Mirena is a t-shaped device which is inserted into the uterus and is meant to stay in the body for up to 5 years, releasing a synthetic hormone to stop pregnancy. However, the devices have been known to move out of place, puncture organs and even be expelled through the vagina. Perforations can lead to infection and haemorrhage. This 2015 article about the Mirena intrauterine device mentions that to 2012, there had been 45,000 complaints made against it to the FDA.  Check out the comments made by injured women below the main article! And this 2018 article tells of an Australian woman who almost bled to death after a Mirena perforated her uterus.     2. Increased Pressure in the Brain: The synthetic hormone released by Mirena, levonorgestrel, is known to cause an increase in cerebrospinal fluid in the brain. (See article here.) The Mirena IUD has been associated with increased pressure in the brain, a condition known as pseudotumor cerebri (PTC) and or idiopathic intracranial hypertension (IIH). Both conditions mimic the symptoms of a brain tumor, such as blurred vision and headaches.

Both the copper IUD and Implanon have been associated with increased bleeding. According to the US Select Practice recommendations for Contraceptive Use 2013, 18% of women report increased bleeding after insertion of the Implanon rod. And this 2009 medical journal article, states that copper IUDs have been shown to increase the loss of menstrual blood by 50%, with around 25% of women opting to have them removed within the first 12 months. This news article mentions the experiences of several women who suffered severe bleeding due to their IUDs, and how they were pressured by their doctors to have them inserted. Contraception advocates, Family Planning don't deny that about 20% of women will have irregular or persistent bleeding.

4. Danger to the Unborn Child

Although IUDs usually facilitate an abortion, occasionally an embryo manages to implant in the uterus and the baby continues to develop. If a IUD is left in place, there are many risks to the health of the baby. According to the US Selected Practice Recommendations for Contraceptive Use 2013, “Risks for spontaneous abortion, preterm delivery, and infection are substantial if the IUD is left in place”.  One study suggested that 8 in 10 pregnancies spontaneously aborted when an IUD was left in place. The guidelines state that it is not yet known if exposure to the hormone levonorgestrel causes foetal abnormalities.

5. Essure: A host of side-effects including death.

(Why would you want these things in your body anyway??)

Essure deserves a special mention due to the variety of side-effects it induces, and also due to their severity. This is what the Essure website tells you about their product:

A small Essure insert is permanently placed into each of your fallopian tubes by your doctor. These inserts work with your body to form a natural barrier that keeps sperm from reaching the eggs, preventing pregnancy.

What the website doesn’t mention is that these harmless-sounding inserts are actually coils of metal, and the ‘natural barrier’ is scar-tissue created by the body as a reaction to the presence of the foreign bodies! The medieval-sounding Essure coils have been linked to a multitude of serious health problems and injuries: there is an 11000-member Facebook group devoted to exposing the effects of this dangerous contraceptive. Whistle-blower Erin Brockowich runs a website with over 1000 stories from women who suffered side-effects from their Essure procedure. There have been over 20,000 separate complaints made to the FDA about Essure, and a class-action lawsuit is underway. Medwatcher website reports 1142 cases of side-effects from users of Essure. The Essure Problems website lists over 100 side-effects, including serious auto-immune disorders, headaches, blood clots and mood swings. Essure  has also been responsible for 4 deaths (see this 2016 article here.) Essure’s manufacturer, Bayer, has divulged that there have been 5 foetal deaths (abortions) caused by their device, but an independent study has shown that Essure may have caused around 300 known abortions.

Abortion advocates, and worryingly, some pro-lifers, believe that contraception use will reduce the number of abortions. But considering that more than half of the women who present for an abortion were using contraception at the time, this is an urban myth that needs to be challenged. Contraception, while perpetuating the idea that sex is simply for recreation, is also physically harmful to the women who use it to inhibit that very function that defines their femininity.

This ABC news article mentions that more than 500 unintended pregnancies, more than 50 vaginal haemorrhages and 27 ectopic pregnancies have been reported to Australia's Therapeutic Goods Administration by women who had used Implanon. 70 pregnancies and more than 100 uterus perforations were reported to the TGA be women who had used Mirena. The article also talks about doctors being influenced by clever marketing from LARC manufacturers. (Note: this article labels pregnancy as an adverse event - a callous reminder of the anti-life forces in our medical system.) Our Testimonies page has personal stories written by Christians who felt that their use of contraception violated God's plan for marriage. Click here to read the stories. If you would like more information on the harmful effects of contraception in a hard-copy format, contact Family Life International, for their excellent resource: the Truth Pack – a set of pamphlets explaining the effects of contraception, Gardasil and the overpopulation myth.