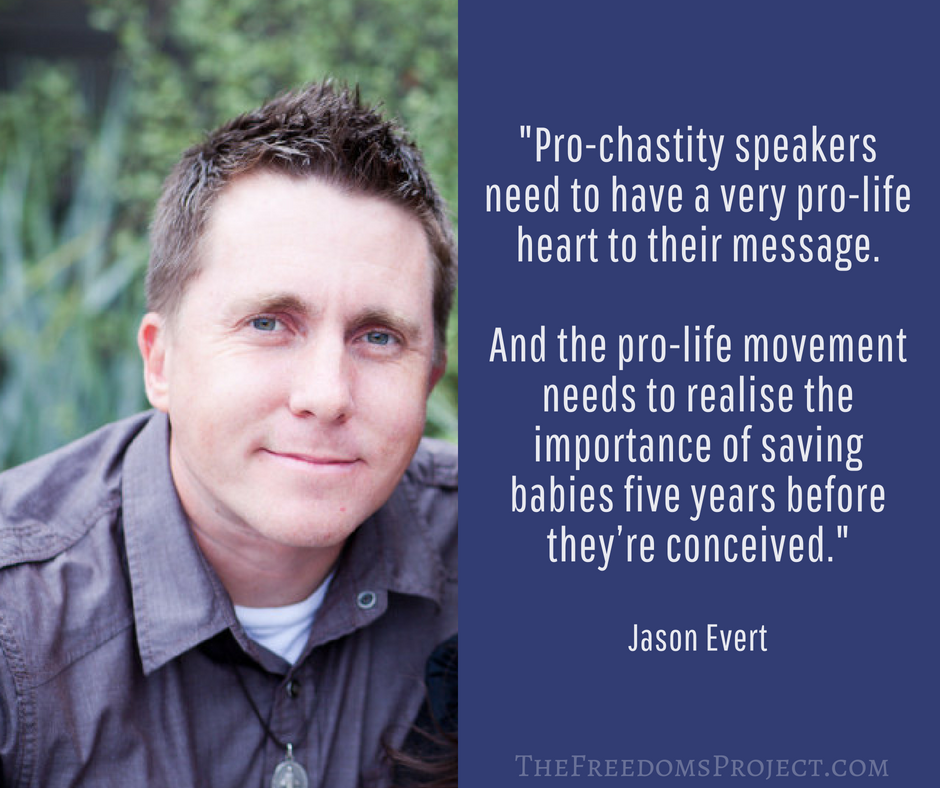 Kathy: Jason, can we win the battle against abortion without preaching the chastity message?

Jason: No. In order to be fully pro-life, we have to first teach them to be pro-love. I discovered that when doing sidewalk counselling in front of an abortion clinic for three years and I had an inescapable feeling of being late. “Now, why am I meeting this woman forty-five minutes before her abortion? You know -  why couldn’t I have met her when she was 15? Because maybe if she’d learned about chastity then, she never would have dated this guy to begin with, and wouldn’t be in this difficult situation at the age of 25.

And so I realised that I was kind of throwing sandbags on the banks of a flooded river, instead of swimming upstream to where the dam was actually broken. I figured if we could seal off the dam, then there wouldn’t be any need for stopping the flood damage downstream.

Kathy: Is that why you started this whole ministry? Because of that feeling of being late at the abortion facility? Pro-life got you into this?

Jason: Hmmm, yeah, that was a major reason. The other part was leading high school youth retreats, and the kids would open up about how much they were suffering in this area of life in particular. And I was reading Pope John Paul II’s “Love and Responsibility” and began to see that this was the antidote to both issues: to the chastity issue and the fruit of it, which is the abortion culture. Because you don’t have anyone going to the abortion clinic who hasn’t struggled with chastity.

Kathy: It's been said that the journey to the abortion facility starts years before the appointment on that fateful day.

Jason: And when a woman is coming in to get an abortion, it might not be her first. It could be her fourth. And if she’s not being evangelised at that moment, perhaps through a crisis pregnancy centre: “You know, it doesn’t have to be this way - there are many different choices you can make in life, so you don’t end up in this difficult situation a fourth or fifth time.”

Because it’s so important for a pro-life ministry to be pro-life -  not only before the abortion, and also after the abortion in supporting her - but also years beforehand. We have to see this as a preventative measure.

And some people are doing wonderful work sidewalk counselling. I was working with a nun once, and she saved 19 babies in one day. So you can’t underestimate the importance of the work they’re doing. It’s not one vs the other; they are two wings of the same plane.

I was once standing outside of a clinic, and I befriended one of the security guards out front. And one day he confided in me, and he said, “You know, every day I show up at work, and I just hear voices in my head, telling me to kill. And I don’t know where that's coming from.” And I said, “Let’s try to connect the dots here.” And he said he struggled with alcoholism, and his marriage was falling apart, and I said, “Let’s pray together ", and he said, "Please." And so we prayed together right outside the abortion clinic.

And I came back a week later and he had quit. Because I had told him, ‘You’re basically working in the vestibule of hell, here. So it’s probably better to find another place to work - get those voices out of your head.’

But then, they kind of had it out for me at the clinic. One day I was out there praying, and I saw them pointing at me. And my friends told me they were saying that that’s the guy that was with Joe before he quit.  A week later we were out there and a police car pulled up. And they came to me, and they pointed down at me, and the police came to me and they said: “Okay, charges are being pressed against you because apparently, you stalked one of the directors of the clinic, and you tried to offer her a coffee and she turned you down. And you asked her on a date and then you chased her into the abortion clinic and you tried to steal her purse.”

And I said, “Oh really? I missed that. When did this happen again?” And they took me to court, and the judge said guilty. And we went to a retrial before another judge and that judge dismissed the case. And I said I don’t even like coffee. (laughs) They were out to get me - you know what it’s like. Ethics are not their strong suit.

Kathy: Why are the pro-life organisations, in general, failing to talk about chastity?

Jason: Largely because they’re so focused on the immediate triage of trying to save the wounded on the battlefield. They’re just trying to save the life of amputees on the battle-field who’ve only got five minutes to live. They’re doing such an important, last-minute effort to save what they can, that it’s hard sometimes to lift up their eyes to see the horizon. Sometimes they may stop and ask, what could we have done to prevent this carnage sooner?

But there’s no competition in the body of Christ. This is something that we need to do together. Pro-chastity speakers need to have a very pro-life heart to their message. And the pro-life movement needs to realise the importance of saving babies five years before they’re conceived.

Kathy: Can you see a place in every organisation for this message?

Jason: Oh, it’s essential. In my chastity talks, I'm holding up an ultrasound of my unborn son and it’s giving the message to the kids when they're 14 or 15: 'Hey, this is what ultrasounds are showing.' You know, they have images of children who appear to be laughing in their mothers' wombs! And I explain this to the kids. And you know, I’m not beating them over the head with some anti-abortion message. This is just pro-life, this is something that we’re for, not something we’re against. It’s very organically woven into the presentation and it doesn’t feel like I’m trying to indoctrinate them on some pro-life position. It’s just a picture of my kid in my wife’s womb. And how do you argue against that?

Kathy: From what you know, are couples who were chaste before marriage more likely to be open to life during married?

Jason:  I think there's no doubt about it. Because the Catholic Church’s teaching isn’t so much, okay, good Catholics use NFP, bad Catholics use contraception. Good Catholics realise that children are the supreme gift of marriage. So if we have a serious reason not to have kids, we can fall back on NFP, but the default position is not NFP. The default position is an openness to life. Because children are the supreme gift.

If you were going to get married and you went to the reception, and you saw all these presents laid out, and one said, 'The Supreme Gift', you wouldn’t be like, I’ll open that in five years time when we know each other better. You’d think, no, we want to receive that gift as soon as we can. So the disposition to do the will of God with your body is something that naturally flows into wanting the will of God for your family. The Church will never tell you how many kids to have, but God will.

It’s a very dangerous thing to put that part of your life completely under His Lordship, because, you know - what if He’s asking more than we want to give because that’s typically exactly what He does? He stretches us far beyond what we expected, but when we look back when it’s all said and done, it’s like, ‘My goodness, if that had been left in my hands, how differently things would have unfolded.' If I took control over my own fertility in such a way that was able to completely eliminate [the prospect of children]… it’s almost like we would get addicted to the ease. It’s like, oh wow - this is so easy having them all at school and not worrying about having another little one waking me up at night. This sin brings its own punishment.

Kathy: I was at a retreat one day, and it was Thanksgiving after Communion, and for the first time in my life I thought, ‘Oh, I think I might be done with having my family now.” And I got a very firm feeling from God - that we must never say never - and I had twelve children already! And He still seemed to be showing me that we must never say never. Then I had another child after that.

Jason: Slacker! (laughter) Didn’t Catherine of Siena have 20 or something?

Jason: Good thing her mum wasn’t selfish and only had 25!

Kathy: Do you find this is the same for non-Catholics as well, though? Do you find that it goes together for everyone, or is it more of a Catholic thing because we have a comprehensive teaching?

Jason: No, I think they go hand in hand because it’s the proper use of our human sexuality. And if we know how to use sexuality properly prior to marriage, then it follows very naturally and seamlessly into marriage. And likewise, the abstinence required during natural family planning means that that’s ok - it’s an expression of love.